Nonwoven medical disposables have emerged as key constituents of the healthcare sector with the product’s one-use trait providing an edge over the age-old woven fabrics used in the hospitals. Furthermore a news published on the company site of, ‘Smithers Apex’ adds to the former speculations by indicating that the medical nonwoven segment is ready to observe a hike of approximately $2 billion by the end of 2018. Undoubtedly this magnification in the international market for nonwoven disposables are being felt due to the factors such as tremendous advancements in the production technology, strengthening concentration on irradiating the HAIs or hospital acquired infections and doctoring up the healthcare infrastructure and offering across developing nations. In a recent outbreak of Ebola in the Sierra Leone has recently brought two hull players Microgard and Arco, who paired up to supply safety systems like disposable suits to British troops against Ebola. 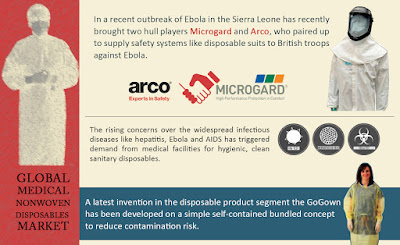 Growing focus on controlling deadly infection as a way to cut down on the healthcare cost reveals that clinics, hospitals and various healthcare facilities are considering disposables as prerequisite. Eyeing this 150 attendees from over 55 countries attended the Asia Pacific Asia Pacific Nonwovens Symposium to catch up with the future market trends into hygienic applications. Meanwhile, the rising concerns over the widespread infectious diseases like hepatitis, Ebola and AIDS has triggered demand from medical facilities for hygienic, clean sanitary disposables for protecting health professionals as well as patients from infection. To top it all the wound care and closure segment that is estimated to reach nearly $20 billion, worldwide by the end of 2020 too has contributed to the growth of the medical nonwovens.

Health requirements of the aging population, rising instances of chronic illness as well as the constant increase in hospital and clinic admissions have resulted in a huge demand for nonwovens. The market growth can also be traced to hike in inpatient as well as outpatient procedures and emerging trends in the home care industry. In a recent report published by Allied Market Research titled “Global Medical Nonwoven Disposables Market”, the most lucrative regions to witness rise in the nonwoven medical disposables includes LAMEA, North America, Asia-Pacific and Europe . The report also indicates that the medical nonwoven disposable industry worldwide is believed to see a CAGR of approximately 9.6 percent through 2015 to 2020. The study also reveals that the medical nonwoven products industry had accounted for an industry share of nearly 54.8 percent in 2014 and would continue to progress through 2020.

To top it all, the strict regulations embraced for safety purpose in different hospitals or healthcare centres have increased need for various products including wipes, facial masks, gloves and gowns among other disposables. A latest invention in the disposable product segment the GoGown has been developed on a simple self-contained bundled concept to reduce contamination risk. Further the nonwoven sale of Ahlstrom this year has reached $1.35 billion making it the leading nonwoven manufacturers globally. The vice president of communication, at Ahlstrom Liisa Nyyssönen said “We need a more open mindset,” Nyyssönen explained  “The sweet spot of innovation is to combine these new technological opportunities with the market needs…what our customer’s customer is looking for.”